Rome, November 23rd, 2020 – On the occasion of the International Day against Violence against Women, the Salvamamme Association, which is at the forefront in supporting fragile families and all victims of violence for more than twenty years, launches a new pilot project: an App of the “Valigia di Salvataggio” (Rescue Suitcase), for full dissemination and sharing of the initiative “designed for women who have had the courage to escape violence to disrupt their own destiny because they deserve all the support of society ”. The project has involved a memorandum of understanding with the State Police and the Rugby Fiamme Oro sports group and provides an emergency plan with psychological, legal and material assistance for those women who, forced to flee their home, have nothing. Since its launch, 1.615 suitcases have been delivered to women victims of violence and other suitcases  have been offered to their children: on average, more than 200 are prepared each year and distributed throughout Italy. Now, thanks to the synergy created with the computer company Softlab, a partner of the Women for Women Against Violence event that has been promoting the project for years, Salvamamme launches the ‘pilot’ in the Capital of the dedicated App, whose experimentation will begin in January 2021. Thanks to significant support and synergy with the Alberghi Confindustria Association, it will allow a response and an immediate first accommodation to those who had the courage to escape violence. H.R.H. Princess Camilla of Bourbon Two Sicilies, who is the project’s Ambassador to the world, confirms her commitment “so that the project, due to its uniqueness and importance, is recognized and supported throughout the world.” 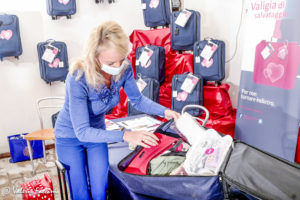 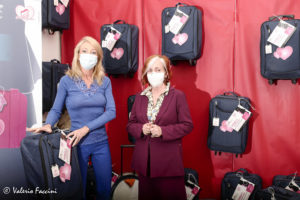