He was the King from 1830 to 1859. Proud and determined, he succeeded in making the Kingdom autonomous economically and even from the biggest countries of those years. 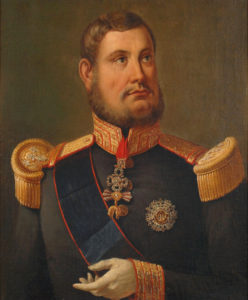 Lots of his works and accomplishments are still remembered: the inauguration of the first Italian railway in 1839 (Napoli- Portici);
the first bridge on Garigliano; the creation of ports all over the Kingdom (in Bari and Ischia); the first electric and submarine telegraph in Continental Europe; the realization of the beautiful Corso Vittorio Emanuele; theatres in Foggia and Lucera; the development of some factories such as the one in Castellamare, Mongiana and Pietrarsa.

During his Kingdom all internal requirements were fulfilled by the industries that exported huge quantities of products: umbrellas, washing machines, hats, glues, pianos, perfumes, medicines, scissors, watches and even steam cars. He had just one son called Francesco from his first marriage with Maria Cristina of Savoia who died after the birth.
Then he married Maria Teresa who learned immediately how to love that “Neapolitan” King. They had twelve sons. He died in 1859 because of a mysterious illness. A unification process should have started after his death.

This process was implemented in such a way that would have been impossible to reproduce with a presence of a King like Ferdinando II.