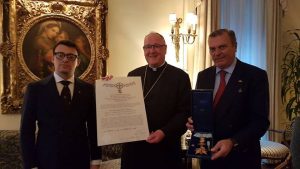 The Grand Master presented Cardinal Dolan with the decoration and diploma of Bailiff Grand Cross of Justice during a ceremony held on 11 March 2018 in the Cardinal’s Residence at St Patrick’s Cathedral. The Order’s Delegate in the United States of America, HE Cav John Viola was also in attendance.

The Delegate of Great Britain and Ireland, Anthony Bailey, said: “On behalf of the British and Irish Delegation, I would like to congratulate His Eminence Cardinal Dolan on his promotion within our worldwide Order. Our two Delegations have always enjoyed a strong and meaningful partnership and I very much hope that future occasions can be found for our respective members to work closer together to fulfil the mission of our Order.”