Vatican City – December 2013. HRH Prince Charles of Bourbon Two Sicilies, Duke of Castro, was received by His Holiness Pope Francis during an audience held in the Clementine Hall of the Apostolic Palace of the Vatican City.

The audience was held to mark the 5th anniversary of Dignitatis Humanae Institute which HRH The Duke of Castro is Patron and which the Constantinian Order and several members of the Order’s British, Irish and Italian delegations are Fellows or supporters.

During the hour long audience the Duke of Castro presented the Holy Father with a DVD of a new documentary produced by the Constantinian Order entitled ‘In Hoc Signo Vinces – Il Labaro Costantiniano 1700 anni di storia’ which outlines the history of Emperor Constantine’s ‘Edict of Milan’ and which celebrated its 1700th anniversary in 2013. 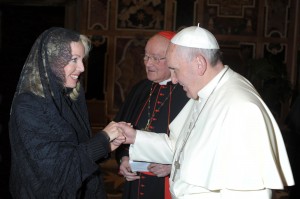 His Eminence Renato Raffaele Cardinal Martino, Grand Prior of the Constantinian Order and Honorary President of the Dignitatis Humanae Institute was in attendance together with other members of the Sacred College of Cardinals and Vatican City officials. 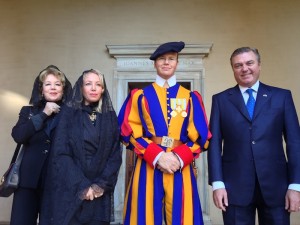 The Dignitatis Humanae Institute is an international response to the rising militant anti-Christian secularism seen throughout the West today. It exists to promote the Gospel in the political sphere, through upholding and strengthening the Judaeo-Christian tenets of Western culture, always with respect and tolerance for those of different faith. It is inspired by Catholic Social Teaching and is ecumenical in composition.

The Dignitatis Humanae Institute has three main objectives. The first is to promote recognition of the reality that Man is made in the image and likeness of God. The second is to insist that this image and likeness is present in every single human person from conception until natural death. The third is to suggest with humility that the best means of authentically promoting this recognition is through the active participation of engaged Christians on the public stage.

The Holy Father highlighted to the audience what is at stake if we fail in our mission, warning of a modern-day “throwaway culture” that threatens to become the dominant mentality:

“The victims of such a culture are precisely the weakest and most fragile human beings – the unborn, the poorest people, sick elderly people, gravely disabled people… who are in danger of being “thrown out,” expelled from a machine that must be efficient at all costs. This false model of man and society embodies a practical atheism, de facto negating the Word of God that says: ‘Let us make man in our image, according to our likeness.”

For more information on the Institute please visit www.dignitatishumanae.com