Lisbon – 6 February 2014. The Minister of State and of Foreign Affairs of the Portuguese Republic, His Excellency Rui Machete, received at the Necessidades Palace in Lisbon HRH Prince Charles of Bourbon Two Sicilies, Duke of Castro and Grand Master of the Sacred Military Constantinian Order of St George. 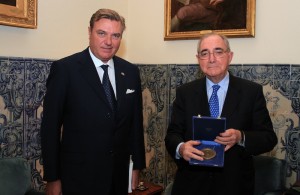 After receiving a formal welcome to Portugal, the Duke of Castro outlined to the Foreign Minister a number of the charitable, humanitarian, hospitaller and inter-religious project undertaken globally by the Constantinian Order. The Duke also announced his intention for the Constantinian Order to adopt for charitable purposes several projects in Portugal and expressed his desire to promote more widely the worthy goals of the Order across Portugal.

Attending the meeting were the Delegate of Portugal of the Sacred Military Constantinian Order of St George His Excellency Baron Miguel Horta e Costa and the Grand Magistral Delegate Inter-Religious Relations, HE Mr Anthony Bailey, OBE.