St John’s, 4 November 2014. A high level delegation of the Sacred Military Constantinian Order of Saint George paid an Official Visit to Antigua and Barbuda from 1 – 4 November 2014 at the invitation of the country’s Prime Minister.

The main purpose of the high level visit was to publically announce the creation of a permanent Order Delegation for the Caribbean, based in Antigua and Barbuda, and to launch a number of significant charitable projects in the country including the Good Samaritan Church and Centre in Hatton the redevelopment St Joseph’s Academy, Christ the King High School and the St John’s Catholic Primary School. The benefits of these projects go well beyond the minority Catholic community to impact the multi-faith Antiguan society as a whole. 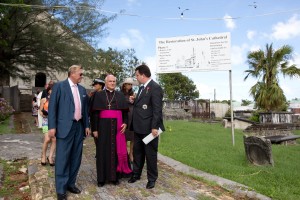 The high level delegation was led by HRH Prince Charles of Bourbon Two Sicilies, Duke of Castro and 54th Grand Master of the Constantinian Order, HRH The Duchess of Castro and His Eminence Renato Raffaele Cardinal Martino, Grand Prior of the Constantinian Order and Cardinal Proto-Deacon of the Holy Roman Catholic Church. This visit marked the first ever visit of a member of the Sacred College of Cardinals to visit Antigua and Barbuda.

On 1 November 2014, the delegation received a ceremonial Guard of Honour upon arrival at VC Bird International Airport which was followed by the playing of National Anthem of Antigua and Barbuda.

During this first day of the visit, Courtesy Calls were paid on His Excellency Sir Rodney Williams, Governor General of Antigua and Barbuda and official representative of HM Queen Elizabeth II, in her right as Queen of Antigua and Barbuda, and Prime Minister the Hon. Gaston Browne. The meetings were also attended by the Hon Charles Fernandez, Minister of Foreign Affairs and International Trade, The Hon Londel Benjamin, Parliamentary Secretary with Responsibility for Ecclesiastical Affairs and other senior government officials.

The Delegation was also received at the Parliament Building by The Hon Baldwin Spencer, Leader of HM Loyal Opposition and former Prime Minister of Antigua and Barbuda, under whose administration the first contacts between Antigua & Barbuda and the Constantinian Order were established in 2012.

The Cardinal Grand Prior of the Constantinian Order His Eminence Cardinal Renato Raffaele Martino co-celebrated Holy Mass together with His Excellency Most. Rev. Nicola Girasoli, Apostolic Nuncio, His Grace Most. Rev. Robert Rivas, Archbishop of Castries, and the Most Rev. Kenneth Richards, Bishop of St John’s- Basseterre, for the Commemoration of all the faithful departed at the Holy Family Cathedral in St John’s on Sunday 2 November 2014.

The Holy Mass was attended by almost one thousand worshippers including the Governor General and Lady Williams, the Prime Minister, the Leader of the Opposition, diplomats and members of the Government and other dignitaries. The programme of Mass was enriched by a cultural display that showcased the local music and traditions. 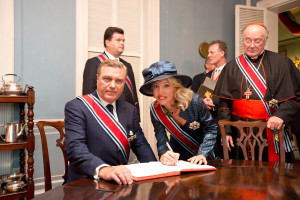 During the Mass, the Grand Master, HRH Prince Charles of Bourbon Two Sicilies, Duke of Castro formally invested Archbishop Robert Rivas, Archbishop of Castries, into the Constantinian Order as an Ecclesiastical Knight Grand Cross Grace and Bishop Kenneth Richards as an Ecclesiastical Knight Commander of Grace of the Constantinian Order. Both clerics have become chaplains to the Order’s newly found Delegation for the Caribbean. The creation of a new Order Delegation for the Caribbean was also announced by the Magistral delegate Sir Anthony Bailey.

To mark the first Official Visit and in line with standard and regular international customs, an Exchange of Honours ceremony took place at Government House in St. John’s on 2 November 2014 between the Grand Magistry of the Sacred Military Constantinian Order of St. George and Government Officials of Antigua & Barbuda during which high institutional awards were granted in reciprocity to each other’s delegation. Such awards were granted by virtue of the holder’s office within the respective institutions. During the ceremony, awards of Knighthoods were bestowed in recognition of the Order’s longstanding contribution to charitable, humanitarian and inter-religious endeavour in Antigua and Barbuda, the Commonwealth and wider world.

The investiture ceremony took place in the presence of the Prime Minister and the Foreign Minister together with senior state, diplomatic and ecclesiastical representatives. After the ceremony, the Governor General hosted at Jumbo Bay Resort an official dinner in honour of the Constantinian Order’s visit.

On 3 November 2014, the delegation attended as guests of the Government the Thirty-third Anniversary of Independence celebrations and the Ceremonial Parade at the Sir Vivian Richards Stadium presided over by the Governor General. Afterwards the Grand Master and his delegation attended an official reception hosted by the Government of Antigua and Barbuda on the grounds of Camp Blizzard. During the same evening, a was held in dinner in honour of Cardinal Martino hosted by the Ambassador of Antigua and Barbuda to the Holy See His Excellency David Shoul and Lady Shoul at their residence. The Governor General and Lady Williams and the Leader of HM Loyal Opposition were among the 100 guests attending.

Visits were paid at the St Joseph’s Academy, Christ the King High School, St John’s Catholic Primary School. The delegation was welcomed by the Headmasters, the teaching staff and the children of the schools, who presented a lively programme of figure marching displays, songs and dances. The visit and the programme was broadcasted live on the local TV and was preceded by interviews given by the Foreign Minister of Antigua and Barbuda, Cardinal Martino, Sir Anthony Bailey, Baroness Scotland of Asthal, Ambassador David Shoul and members of Antiguan government and of the clergy. 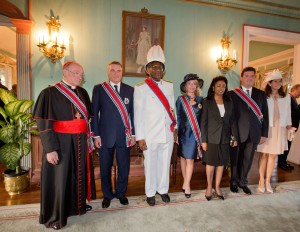 Delegation member The Rt Hon Baroness Scotland of Asthal, QC said: “I am truly delighted that the Constantinian Order, of which I have been a member since 2003, has been so gracious as to accede to my pleas that it should widen its global programme to include the Caribbean region, which sadly has within its compass many areas of acute deprivation and need which, notwithstanding the strong faith of its people, merits further spiritual encouragement and is worthy of immediate financial and other support.

I am confident that the projects identified will be of enormous benefit to the people of Antigua and Barbuda and the Caribbean region and the joint commitment of the Order and those with whom they will now be privileged to work in Antigua and Barbuda will promote ecumenical working between and within the various faith groups, help to develop understanding and trust and to deliver the relief to the poor which His Holiness Pope Francis has so encouraged us all to promote.”

The delegation met the Most Rev. Leroy Errol Brooks, Anglican Bishop of Antigua and visited also one of the symbols of the Antiguan Christian identity, Showbox for iPhone the imposing Anglican Cathedral of St John the Divine. The Cathedral is currently under reconstruction and towards which the Order agreed to make a contribution in the next round of funding.

On the last day of the visit, the delegation met at Parliament Building with leaders of the diverse Antiguan and Barbudan faith communities.

In conclusion of the visit, on 4 November 2014, an official luncheon in honour of the delegation was hosted by the Hon. Prime Minister, Gaston Browne and Mrs Browne at Copper and Lumber, at Nelson’s Dockyard, one of the historic landmarks of St. John’s. The luncheon was attended by the Governor General HE Sir Rodney Williams, the Hon Steadroy Benjamin MP, Acting Prime Minister of Antigua and Barbuda and numerous members of the government and members of the Catholic and Anglican clergy.

The delegation departed Antigua and Barbuda on 4 November 2014 to continue the regional visit to Dominica, Saint Vincent and the Grenadines and Barbados.